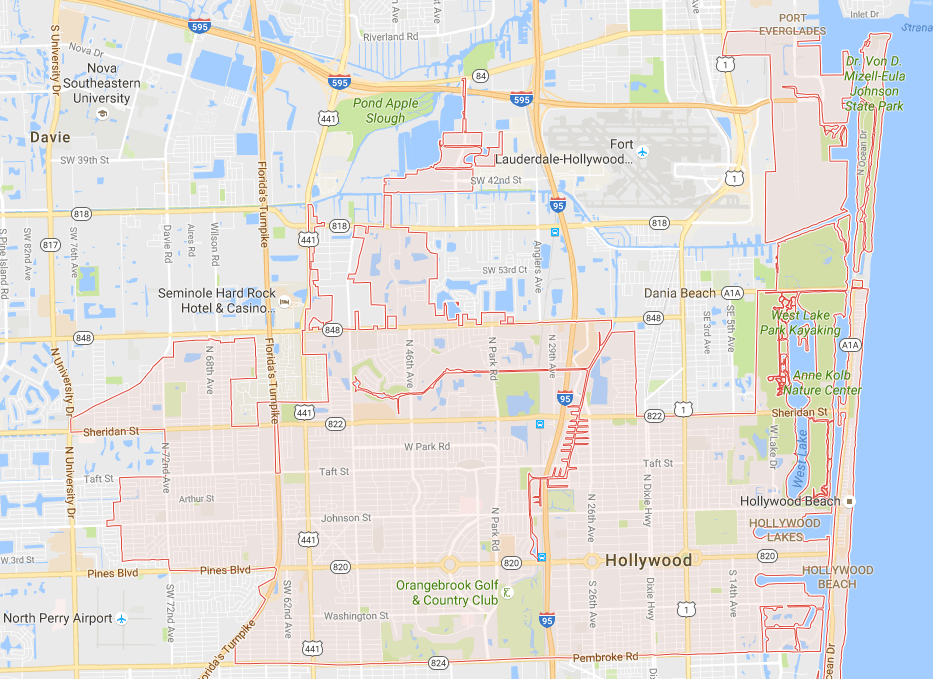 Welcome to the City of Hollywood, a place where you will find your business can thrive. Hollywood is a business-friendly destination ideally located in the heart of South Florida at the crossroads of the Florida Turnpike, Interstate 95 and both the CSX and FEC railways.  Whatever your business, chances are you will find the right spot for success in Hollywood.

Moving efficiently throughout the region and state from Hollywood is made possible by several transportation assets. First, Hollywood is conveniently located along Interstate 95 between Fort Lauderdale and Miami. Other major highways such as Interstates 595 and 75, along with the Florida Turnpike, provide convenient access to the western and central portions of the state.


FLL is located on the City’s northern boundary and is one of the fastest growing airports in the country. FLL is ranked 21st in the U.S. in total passenger traffic and 13th in domestic origin and destination passengers. There are more than 325 departure and 325 arrival flights a day. FLL offers nonstop service to more than 140 U.S. cities and flights to Canada, the Caribbean, Mexico, Latin America and Europe. FLL averages 640 commercial flights per day on 26 airlines. There are also 100 private flights. Each day over 80,000 travelers pass through the four terminals at FLL.

Florida East Coast Railway (FEC) and CSX Railroad run through Hollywood offering convenient and affordable rail transportation for moving freight between rail yards and trucking terminals. To ensure continued economic growth for the region, FEC has completed a $53 million, 42.5-acre near-dock intermodal container transfer facility that will transfer international and domestic containers between ship and rail and handle domestic containers originating in or destined for the eastern United States market.

As part of the South Florida Regional Transportation Authority, Tri-Rail commuter service connects Hollywood with Miami to the south and downtown West Palm Beach to the north. Two stops are located in Hollywood. Convenient bus connections are provided from all Tri-Rail stations. Additionally, the three major South Florida Aiports (Fort Lauderdale/Hollywood, Palm Beach and Miami) are accessible via train and connecting shuttle service.

The Sun Shuttle, operated by Circuit, is an environmentally-friendly, electric public transportation option that transports riders through service areas from City Hall Circle to Downtown Hollywood, on Hollywood Beach and along Federal Highway. Riders can quickly and easily get to where they want to go in Hollywood. For more information on the Sun Shuttle, please click here.